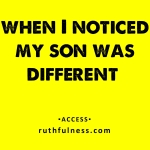 At around the age of 2, I noticed my son  wasn’t doing the same things as my friends sons were doing.  He didn’t have the language, play skills or eye contact that the other children had.  He seemed to be in his own world, he  just wanted to watch and play with himself.  He was a happy baby!  Then, my daughter was born and his behaviors became more than a terrible two-year old.  I wouldn’t know what he wanted and he would start screaming and kicking for what appeared to be no reason.  He would be inconsolable and no one knew how to help him.  He would drool through 3 shirts a day because he was putting the collar of his shirt in his mouth.  Then he would only eat particular foods and preferred sauce on his foods.   He would not allow me to brush his teeth!  He wasn’t able to follow basic directions, he would fall down often, then there was the climbing and jumping nonstop, and he would have the hardest time going to sleep. OH, and I forgot the running, running, and running.  That kid could run!

At age 2,  I put my son in a private school,  I started getting more help from the teacher. She was so kind but concerned that he wasn’t speaking and other developmental concerns.  The director was awesome and was able to get my son a therapist once a week for an hour from PARC family focus program.

This program is one of the best.  She visited my son once a week and worked on the skills he was behind in and left detailed notes about what was easy and hard for him.  I still have those notes!

Once we started working with PARC I started to see that I had experienced professional that could guide me and my family on the road to getting help and assistance.  Finally, someone else supported the idea that I had regarding getting my son help that something indeed was “wrong”.

A journey of education, access, advocating and love! Maximize your knowledge of autism through stories, tips and action. View all posts by ruthfulness

Autism and the Tooth Fairy

I took the playground back!

We are going back to school